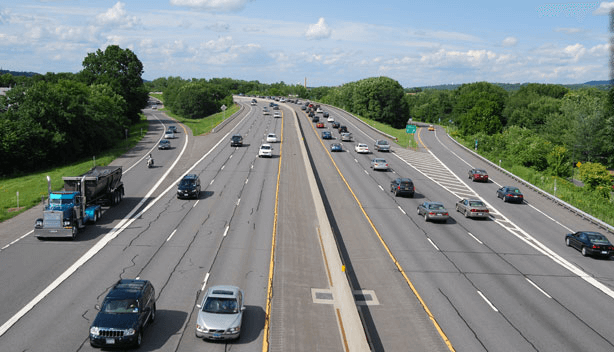 Will Federal Highway Construction Dollars Ever Come Back?

One of the many political issues in Congress which presently suffers from a dearth of press coverage amid the toxic debates over Medicare cuts, tax increases, budget slashing and the deficit ceiling, is the question of long term reauthorization of the Federal Highway Trust Fund. However, work on the Highway Trust Fund issue does continue in Washington. Joseph Kile, CBO’s Assistant Director for Microeconomic Studies, testified recently before Max Baucus’ Senate Committee on Finance about the status of the Highway Trust Fund. The picture Kile painted was not a particularly pretty one.

Current Highway Trust Fund spending levels of $45 billion per year, adjusted for inflation in construction costs, will exceed the revenues produced by current federal motor fuel taxes by $2.5 billion in fiscal 2011, and by $3.2 billion in 2012. Since the Highway Trust Fund is not permitted to go into a deficit position, even the modest option of maintaining current spending levels will require either annual make up appropriations from general revenues, an increase in federal motor fuel taxes, or additional user fees in the form of tolls or vehicle miles traveled taxes.

Limiting Highway Trust Fund spending to an amount equal to revenues produced by existing federal motor fuel taxes would result in an immediate reduction in federal highway expenditures from the current $45 billion per year down to about $30 billion per year. Funding at this level would increase deferred road maintenance and reduce new road and transit construction, resulting in accelerated crumbling of an already overstressed national transportation infrastructure.

Which Way Is Congress Headed?

Even if the Republican dominated House of Representatives would pass significant motor fuel tax increases together with new tolls or vehicle miles traveled taxes, the nearly universal inability of state and local governments to raise revenues to produce the required additional matching funds makes it very unlikely that we will see the federal transportation dollars represented by either option 1) or option 2) enacted in a long term Highway Trust Fund reauthorization measure in the foreseeable future. For the same reason, option 3) is less than likely since it would also require more state and local matching appropriations, though not quite at the astronomical levels represented by options 1) and 2). Even should a vehicle miles traveled tax be enacted to supplement revenue from motor fuel levies, the long lead time for adoption of the in vehicle metering technology required to assess and collect the new tax, together with the anticipated privacy objections to letting the federal government have a detailed GPS record of everyone’s minute by minute vehicle travel movements, will likely delay options 1), 2), and 3) for many years to come.

This makes option 4), an immediate one third reduction in Federal Highway Trust Fund expenditures, seem to be the most likely result in any long term Highway Trust Fund reauthorization measure coming out of the 112th Congress. Of course, the fifth alternative, unmentioned in Kile’s Committee testimony, is that Congress continues to limp along with quarterly or semi-annual highway trust fund reauthorizations, as it has for the last few years, awaiting a game changing House election for the enactment of any long term reauthorization legislation. So, will federal highway construction dollars ever come back? As I see it, not any time soon.